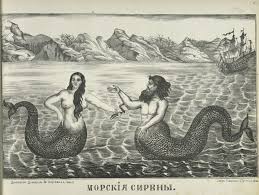 Mermaids are mythical aquatic creatures with the upper body of a human and the tail of a fish. The origin of mermaids within folklore varies from culture to culture, but most deptict mermaids as nonviolent creatures of the sea, similar to that of a water sprite. For example, in Korean folkore, mermaids would warn sailors of inpending storms. the western concept of mermaids was influenced by the concepts of sirens in Greek Mythology, which were originally half bird instead of half fish. This is actually where we begin to see the folklore of mermaids drowning sailors in particular, although the concept of mermaids drowning unsuspecting individuals was prevalent in West and Central African countries, as well as in the Phillipines.

Although mermaids have become sexualized by American cinema, the original lore surrounding mermaids was not inherently sexual because the creatures were more fish than human. Even in West and Central African cultures, mermaids did not lure people, specifically men, to their deaths with their bodies. Instead, it was thought of being ambushed if a mermaid caught a victim unguarded.